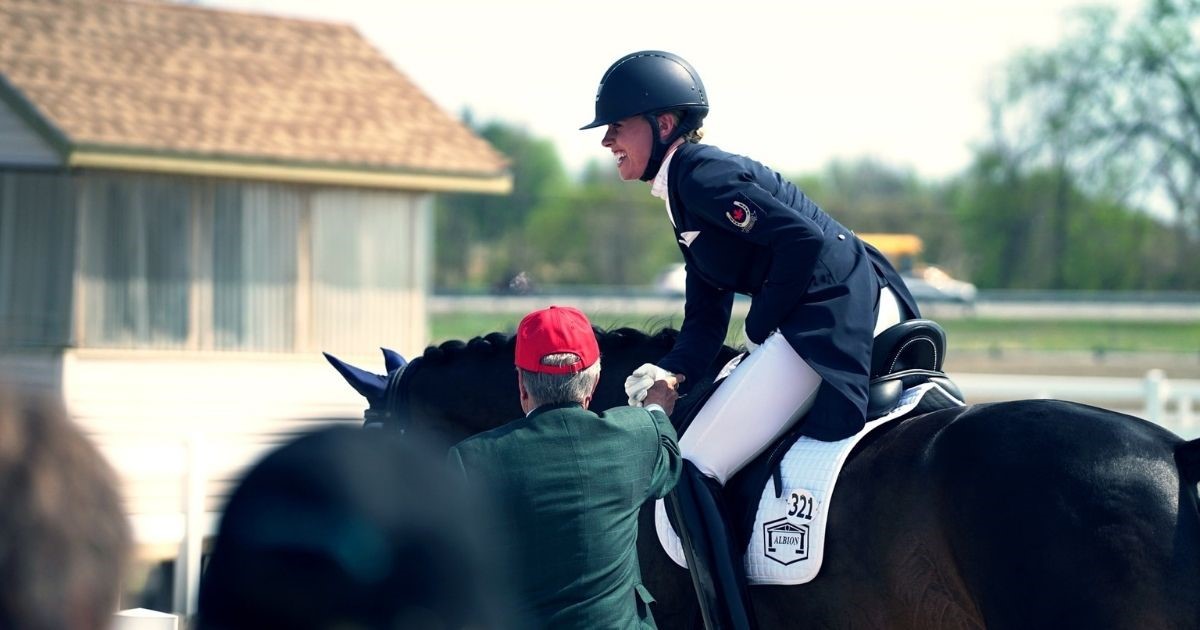 Do You Focus on the Joy of Winning or the Pain of Losing?

Recently I watched an interview with professional tennis player Rafa Nadal. When the 60 Minutes interviewer asked Nadal, “What’s more intense for you – the joy of winning or the pain of losing?”

I hit the pause button. I mean, literally – I paused the TV show.

Photo by Jarett Lopez on Unsplash

As a horse person and likely a competitor in some discipline, how do you answer this question?

What’s more intense for you – the joy of winning or the pain of losing?

I’ve been riding horses and competing with them for a lot of years. While I don’t consider myself to be a super competitive person, if I’m being honest, I really don’t like losing very much either.

So, the more I thought about it, I could see that this interviewer had stabbed straight into the heart of what it means to compete. Competing brings out some powerful emotions!

The “Spirit” of Competition

I know some people who ride horses yet have no desire to compete. Truthfully, I don’t get that. If you’re going to do something, you should have a purpose and a way to gauge your progress.

For me, the intensity of joy I feel, even on a trail ride, is amplified if there’s a ribbon handed out at the end. I do know that not everyone needs those things. My horse could care less. His extreme joy comes from putting his head down and eating grass along the way.

But I do love looking at those ribbons and trophies hanging around my office!

Is it bad that I only keep the blues and reds?

What Does It Mean to “Win”?

Did you know that Webster’s Dictionary offers eight definitions of the word ‘win’? Not all pertain to this discussion, but basically, it says I could get that ribbon through EFFORT or LUCK, in a BATTLE or CONTEST.

No emotion there! Ha. These definitions imply a comparison. You win by besting the other competitors, right? Seriously, what’s the first thing that you look at after competing?

If I’m being honest, yeah, I look at my score (or time), comparing it to other people’s scores. What did I do that was better than her or him? Sure I have experienced some intense joy when my score is higher than certain other peoples’ scores.

OMG, if you thought there was emotion packing the definition of ‘winning,’ let’s talk about ‘losing.’ DESTRUCTION, FAILURE, DEPRAVATION, PAIN, SUFFERING… and the list goes on!

Kill me now! You know you’ve felt at least a few of these. Looking at my reining scores from last weekend makes me feel like losing my lunch.

The struggle is real.

Why Do We Compete?

We’ve all heard someone, at some point, say something to the effect of, “You’re only competing against yourself.” Even with that said, we’re never completely satisfied with our performance. Nope – even that pretty blue ribbon or big brass trophy isn’t enough evidence enough for most horse people! Even when we beat our personal best score, we have a hard time calling it good.

I think this is what the 60 Minutes interviewer was getting at.

Winning might put a HUGE SMILE on my face… for a minute.

I’m OVERJOYED! Even intensely THRILLED with a victory! For a while. But then I start picking the scab. Do you know what I mean?

We celebrate for seconds, then spend hours looking for mistakes. Maybe it’s the nature of horse people to be such masochists and crave criticism. If the judge doesn’t beat us up, we’ll do it ourselves!

Personally, I think we do it for motivation. It gives us a reason to get back on the horse and compete another day.

What Would Rafa Say?

The 60 Minutes question made me pause and consider how I tend to look at my horse competitions. I do get joy from winning, and losing is painful.

When you ride horses, sometimes “winning” just means not falling off, in which case, “losing” would be INTENSELY painful…

I went back and watched this 60 Minutes interview again to discover a few more pearls of wisdom from Rafa. At the 2008 Wimbledon Final, his uncle and coach, Toni Nadal, thought Rafa was undoubtedly set up to lose to his opponent, Roger Federer. Rafa told him:

This prompted a discussion about the mind games athletes play with themselves. Self-doubt is the most dubious. The interviewer, Jon Wertheim, suggested that to Nadal, perhaps self-doubt had become more like a super-power.

Nadal replied with something that can also be applied to showing or riding horses. He said, “I think (self-doubt) is good because then I feel alert. Tennis is a sport where things can change very quickly.”

When riding horses, things also change very quickly! It’s a concept that my riding coach is trying hard to drill into my head. He routinely tells me that showing horses is continual crisis management. You can’t expect anything to go as planned because you’re dealing with a thinking, feeling individual. All you can do is stay alert and be able to adapt.

After thinking all of this through, I think I’ll set a goal. In the future, I’ll only compare my scores to my own past scores and not to my competitors’ scores. I’ll look at the event and ask, “Was I any better equipped this time?”

I’ll put more effort into something Dressage riders have done for years – use each competition as a ‘test’ and each score as a tool to improve, not as an indicator of success or failure.

Now back to the original interview question that gave me the inspiration to write this blog. Nadal’s answer is pretty profound for someone just in his mid-30s. He said, “Too often in life, we remember the negative things because they have the greatest impact on us… But yes, looking back over my career, I can say I have been happier with my victories than I have been upset by my defeats.”

Too often, we remember negative things because they have the greatest impact on us… I have been happier with my victories than I have been upset by my defeats.

How long will I have to compete before I can say the same? And is that too many characters to put on my headstone?

Which do you tend to focus on, the wins or the losses? Why? We’d love to hear from you!

Groundmaster Equine Stall flooring is more than a horse stall mat. It is a permanent one piece system that provides a safe level surface with drainage.